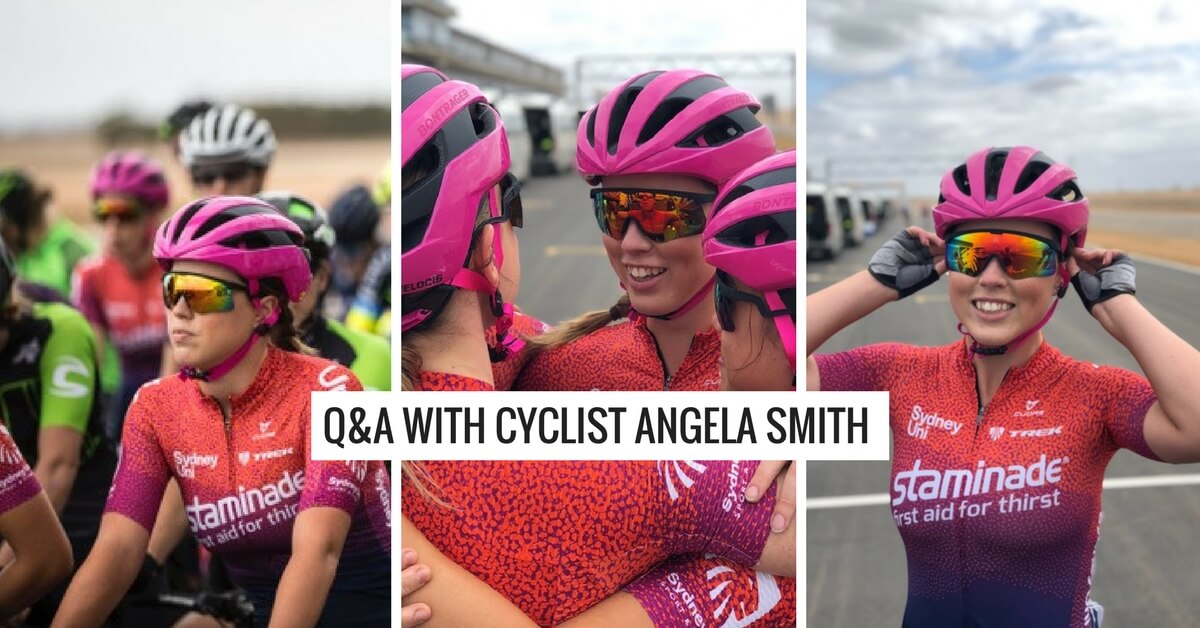 Originally from Sydney, Angela Smith has been riding since she was 16 years old. Torn between track and road cycling she fits both seasons into her year of riding. She balances her road and track cycling with working part-time and studying a Bachelor of Commerce at Macquarie University.

Staminade: How did your love of cycling begin?

Angela: “I rode bikes a lot as a kid but never a proper road bike. I first began road cycling when my Dad bought me a road bike when I was 16 years old. We rode to the 3km climb Bobbin Head, a local ride for myself. From there I joined a Junior Cycling Academy to improve my bike handling skills and soon after thought I would join in on a Try the Track day at the Velodrome where my track training and racing started.”

Staminade: What are your top 5 tips for young aspiring cyclists?

Staminade: What’s it like being a female athlete in today’s society?

Angela: “While there are still struggles, I find it to be an exciting times. Things are changing, though slowly there are changes being made with more equality and respect towards female athletes not only in cycling but in all sports across the board!”

Staminade: What has been your greatest success to date?

Angela: “A bronze medal at the National Track Championships in the Teams Pursuit was a recent highlight of mine. As it was my second track nationals to date, it was a really nice way to start the year and to be able to ride with the likes of Ashlee Ankudinoff, an absolute gun on the track and such an experienced and well composed athlete made it a really special medal for me.”

Angela: “To medal at the Commonwealth Games and Olympics is my ultimate goal.”

Staminade: Who was your role model as an aspiring cyclist?

Angela: “As a junior Shara Gillow was a big inspiration. Knowing how hard time trialling is and watching her win the Australian National Time Trial Championships I always have admired how much dedication and commitment is required to win the time trial, not once but numerous times now.”

Angela: “Putting on race numbers the night before and ensuring I’ve got my bag packed with race food, hydration, recovery is a big part of it. On race day kit goes on an hour to start and depending on what event I’m racing the usual is 30mins warm up with 15 minutes spare for a pre-race gel and last minute prep before heading to the start line.”

Staminade: How does a typical training week look for you?

Angela: “My weeks are set out with two blocks of solid days. Monday is recovery with a 3 day block of rides that include high intensity and strength efforts within my ride. Friday is another much needed recovery ride before a weekend of longer endurance rides with more aerobic efforts.”

Angela: “Nailing efforts is always a nice feeling and having those recovery days to rest knowing that you’ve put in some solid days is always sweet.”

Staminade: Hardest part of training and how you overcome the challenge?

Angela: “Training can be a mental challenge. How I get through this is to prepare myself the night before, write my efforts on my stem notes, lay out my kit, fill my bottles up and training food ready to go and set my alarm. This way I have no excuse not to get up in the morning and get it done. If this is still a struggle, thinking about how good I feel after I’ve done my ride gets me out the door.”

Staminade: Staminade’s tagline is ‘First Aid for Thirst’, what does this mean to you?

Angela: “Staminade is my go to hydration on and off the bike. I often will drink Staminade the night before a race to make sure I’m hydrated enough. During racing having a bottle of Staminade mix will help replace a lot of the fluid I’ve lost through sweating and with a bit of carbs helps refuel the tank. Staminade combined with my race food works best for me.”