What Happens to Your Body During an Ironman? 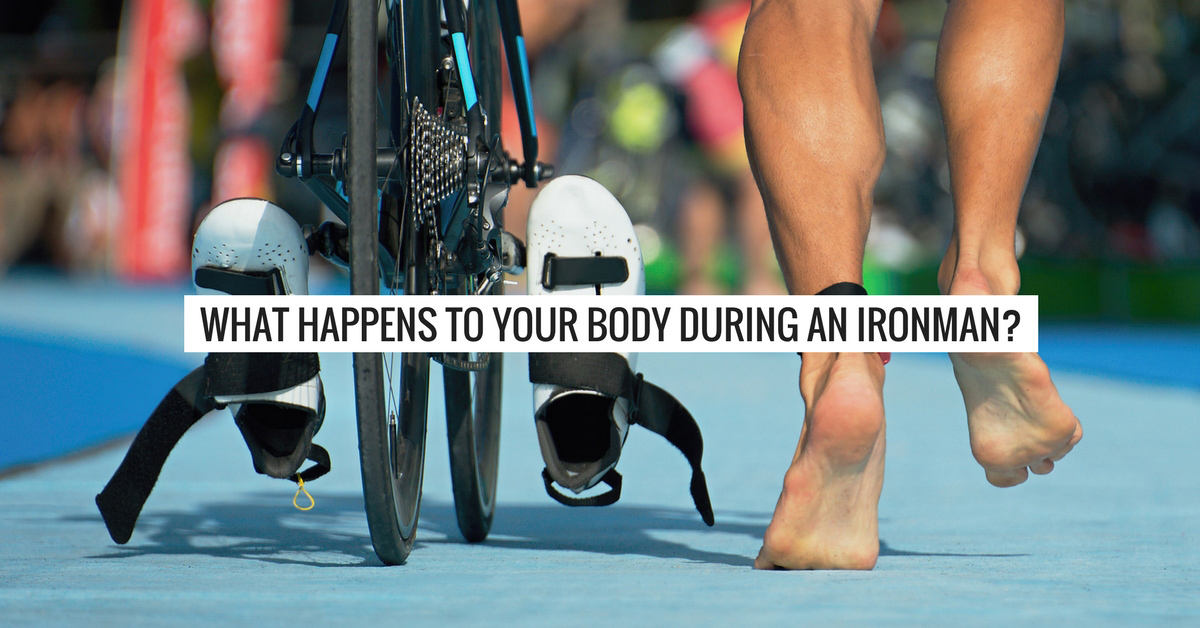 What Happens to Your Body in an Ironman

An ironman triathlon is widely regarded to be one of the toughest single-day sporting events in the world, and for good reason. Perhaps you know already what it feels like to swim 3.86km, cycle 180km and then run 42.16km. Do you know what’s really going on inside your body? The average ironman competitor burns around 8,000 calories over the race, and we shall examine just what this does to your poor body!

An ironman affects your body even before the horn has sounded. Research suggests that the mere anticipation of exercise increases blood flow to the soon-to-be working (and soon to be tired!) muscles, and epinephrine (also known as adrenaline), is released. It’s essentially the same feeling your dog experiences when you show him the leash.

3.86 kilometres may sound like a walk in the park in comparison to the rest of the 226.3-kilometre event, but the average swim takes four times more energy to complete than running the same distance. The biochemical state of every system in your body changes throughout the race, as it takes on the three different physical challenges.

The cool water at the the start of the race eases thermoregulation – the body’s process of regulating its own temperature. However, the strenuous activity soon leads your body into a stage called anaerobic glycolysis; or you may know it as the part when your legs and arms start to burn! But carbohydrate stores and adrenaline will help you push forward until the end of the swim.

As soon as you hop out of the water, this is where your body temperature will start to rise. It rises rapidly at first; perhaps from 37.5 – 38.5°C within the first 10-20% of the bike, and then for the remainder of the race, stays within a very narrow range, maybe 0.1 and 0.2°C. Thank heavens for sweat.

Perspiration is a vital cooling mechanism for the body; it rids your body of water, sodium, potassium and other chemicals; helping to keep you from overheating, especially on those particularly hot days. However, the rapid loss of fluids, while necessary in cooling, hinders performance. Dehydration reduces blood volume, which in turn, minimises the availability of oxygen getting to your heart. In a typical ironman, athletes sweat in excess of one litre of fluid per hour on the bike and run – adding up to nearly 10 kg of fluid for many athletes! Therefore, if at least some of these fluids aren’t replaced through drinking, competitors would produce much, much slower times in the races.

180.25 kilometres later you’re back on your feet for a casual marathon to finish things off… This is stage where the phrase ‘running on empty’ really begins to come into play. Typically, the main physiological challenge of ironman racing is supplying the muscles with enough energy to cover the distance as quickly as possible. Endurance is strictly limited by the availability of glycogen in the muscles, and when these stores fall too low, you’re down and out, so if you haven’t done sufficient training, this is often the reason you won’t be able to complete the ironman. But rigorous training can greatly increase the body’s capacity for glycogen storage, as well as the capacity to burn fats (allowing the athlete to conserve glycogen), enabling you to push on for longer.

Then there is ‘the wall’. Those of you who have run a regular marathon, you will have had a hint of this feeling. The last few kilometres of the ironman event is a unique event in which your body is so impaired from the sheer beating of the last 10+ hours, that it’s almost funny. Your muscles are drained, your mind is drained. Stride length decreases significantly, and your body begins to grind to a halt. Perhaps the most famous instance of this was when both Sian Welch and Wendy Ingraham at the 1997 Hawaii Ironman, were forced by their shattered bodies to crawl simultaneously across the finish. Some people may view the scene in horror, others may be inspired by it. Either way, it shows what such an endurance event like the ironman really can do to the body.

It takes a good while for the body to recover from the strains and stresses of an ironman, and low levels of amino acids (that fuel the body’s immune cells) greatly increase your susceptibility to viral and bacterial infections. Other markers, such as muscle damage and inflammation, can remain significantly elevated in ironman competitors for up to three weeks after they cross the finish line.

So, take a well-deserved rest in the weeks following the race, your body needs it… until you sign up for your next ironman that is!